Today is all about one of my favorite [natural] secrets to overcoming bulimia and eating disorders.

Now this isn’t to say that you just need to pop a pill filled with serotonin and your bulimia or anorexia will disappear.  Please let me be clear about this. That’s now what I’m trying to say.

What I am saying is that one of the things I learned about early on in my bulimia recovery process was the importance (especially to women) of the chemical serotonin.
[polly_newsletter_form]

Not being a medical expert, allow me to share a little of what I’ve learned from Health Ambition so you can understand the technical/specifics before I start in on how this effects bulimia.

Serotonin is a neurotransmitter – this is a chemical substance that transmits nerve impulses across the space between nerve cells or neurons. We call these spaces synapses.

Serotonin plays an important part in the regulation of learning, mood, sleep and vasoconstriction (constriction of blood vessels). Experts say serotonin also might have a role in anxiety, migraine, vomiting and appetite.

To boil all that down the way I first learned about the importance of serotonin was at a seminar and from reading John Gray’s books (author of Men and From Mars…).  John is not only a doctor, but also very, very versed in nutritional needs for women and men.  I loved his book Mars and Venus Diet & Exercise Solution.  I found the information to be invaluable in my understanding of basic (and complex) nutritional needs and how they differ between women and men. I HIGHLY recommend it.

Now back to serotonin and bulimia.

Serotonin, as John Gray would say, is your body’s happiness drug.  First thing I said in my bulimia recovery early days when I heard that was, where can I get some more?!

There’s good news. There are ways you can get more of your body’s natural happiness drug (serotonin).

Once I heard that I was floored.  It totally transformed my relationship with my husband.  Well, I still was a nag and he still was a slacker, but at least I finally understood why I would pick up around the house up until I’d fall over in bed at night and he’d lie on the couch after a long day at work, but would be happy all the while.  It’s because of these two chemicals. 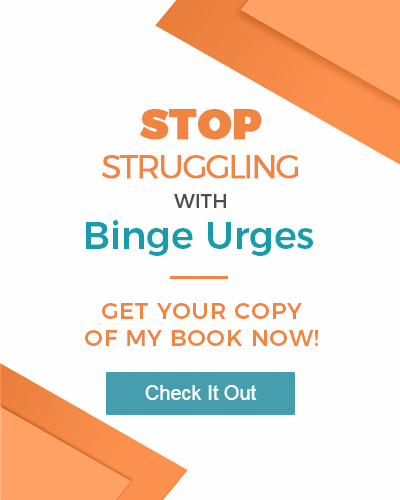 How Can I Produce More Serotonin Naturally?

By now you may not be clamoring for info about how to boost serotonin naturally, but if you knew a little more I think you would be.  Because this helped me so much during my recovery, I’d like to share some of the ideas I’ve learned about over the years to naturally increase serotonin in women.

1. Chat With Friends – I forget the exact number, but John Gray says that having a chat with your best girlfriend(s) is a great way for the body to naturally produce serotonin (plus being with loved ones releases oxytocin – aka the body’s “cuddle drug”).  I totally recommend in my recovery program that people have a lifeline – someone they can call and talk it up – when they’re feeling down.  Go for a short 20 minute walk with a friend or even a call about the weather to catch up can produce serotonin.  It doesn’t have to be an intense therapy session for the chemicals to wash over you and help you feel better right away.

2. Avoid the Stimulant Trap – Caffeine, sugar, and alcohol. This time of year with our busy days it’s hard to get it all done. These substances temporarily give you a lift, but actually deplete and blunt valuable hormones over time.  Nicotine can also affect your happiness, so consider finally giving up that bad habit for your mental and physical well being.

3. Eat Well – extremely high carb diets can effect your brain chemistry.  Get a balance of carb (small), protein (consider non-animal protein sources like kale) and fat. Yes, you heard me.  Get your fat!  I don’t have time to go into it here, but get John’s book and you’ll understand why women need good fat in their diets.

4. Get To Bed! – getting enough sleep each night (good sleep, not the up and down kind of interrupted stuff) can do wonders for your brain chemistry.  Do yourself a favor if you haven’t and set a bed time that supports you getting 7-8 hours a sleep each night.  Make the room a little cool, make it dark and quiet and enjoy some good zzzz’s.

5. Exercise for Mental Health  – Exercise is a natural stimulator of many important “mood” hormones, including serotonin and dopamine.  With just 15 or 20 minutes of exercise every day you can naturally release these feel-good hormones that are so important to your happiness and well being.  in this case, exercise is about feeling good, not looking good.

6. Tapping – I actually bought John Gray’s bouncing video for exercise years ago and really enjoyed it.  In it he recommended tapping your head as a way to release serotonin.  I can’t say that this will help instantly or how much it will help, but it can’t hurt so give it a try, eh?

Lastly, I want to share what Livestrong.com says about some foods that can boost serotonin and dopamine (another helpful chemical in the body).

Vitamin B6, found in abundance in leafy green vegetables, fish, poultry and whole grains helps elevate serotonin to “feel good” levels. Not consuming enough folate-rich foods can also decrease the amount of serotonin in your brain.

Anything Else I Can Do to Improve Serotonin?

Actually, yes there are!
John Gray has a test you can take to find out if you’re low on serotonin.  Click here.
I’m not a big fan of taking a lot of pills to feel better, but I did want to share this with you because I trust John Gray’s advice and think he has a lot of experience to back up his recommendations that aren’t based upon typical Western medicine philosophies of over medicating people and using lots of pharmaceuticals to feel better.
Lithium Orotate, according to John, can help fill in the gap when our body is depleted of serotonin.  I haven’t taken this before myself (I’ve used the above techniques), but after watching this video I’m ordering some to try it. I’ve always had good results with his stuff, so I’m sure this will have a similar outcome.  If you’re interested in checking it out, too, here’s where he sells Lithium Orotate online.

Any Other Ideas about Serotonin?

I’ve rambled off some ideas here to help you with your bulimia recovery by boosting your natural serotonin levels.

Do you have any advice for others about the body’s natural chemicals like oxytocin, serotonin and dopamine that you can share?

I hope you do…and will share in comments below.

The Happiness Advantage Principle #2 – The Fulcrum and The Lever Insights

This is part of a series of posts based upon the book The Happiness Advantage by Shawn Achor.…