I’m diving deeper into the study of habits – how they’re created, what triggers them, how to change them and the like – so I was recently absorbed by the book The Power of Habits reading it from cover to cover in a few days.

The more I learn about the study of eating disorders, addictions and all things change and transformation I find new little nuggets here and there.  Since I had bulimia for 20 years and recovered 10 years ago on my own you’d think I knew precisely what steps I could prescribe to someone like you.  Well, the truth is there are a lot of factors.

I’ve written a lot about eating disorder recovery and my story in particular, but sometimes when you’re in the midst of it you don’t necessarily realize what you did and when that worked…or why it worked.

The Power of Belief

As I was reading The Power of Habit I was struck by the idea the author presented that said that people would fall back on their old habits if they didn’t believe.

Boy…that sounds so simple. But, I’ve been giving that a lot of thought over the past few days and that really, really, really is a powerful component.  Hence, why this post. [cheezy smile…wink]

I’m sure there are dozens of books out there on belief and things like faith and trusting in something higher than you.  I read the story the author had shared of a down and out football team whose new coach taught his players a series of habits to follow without thinking on the field. It’s a good story, but too much to share here.

In short, the team didn’t win the big prize for many seasons because the players would crumble under the pressure of a big game and go back to their old [losing] habits.  Habits they thought were better than their coaches, but ended up causing mistakes and failure in the end.  In one season the team came together around a tragedy which the author and coach said created an internal sense of “team” (finally) and they trusted and believed in themselves and the habits the coach had taught them. 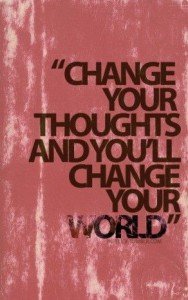 The power of the habits took them so far and when they fell back on old habits they cracked and failed.  They lost.  When they believed in themselves, in their potential and the fact that they could win if they did these routines correctly…they eventually won.

Without the belief instilled in each and every player, the team broke down…the players failed themselves an the team.  They gave up on being champions and went back to non-winning routines and strategies that didn’t serve them…or the team.

How Can This Help You Create Change?

As I thought about this story at first I didn’t fully see the correlation for how I overcame bulimia after 20 years.  And then I sat there for a moment and it hit me.

When I finally created lasting recovery in my life it was because I attended a workshop in 2005 called The Landmark Forum.  A personal transformation weekend workshop I still recommend people attend for various reasons. It’s not focused on eating disorders or addictions or anything specifically. It’s just a deep dive into consciousness and awakening you from the inside out.

The powerful part for me that correlated with this team’s winning streak was the fact that as a team they created a sense of belief in one another and themselves that they could win if they stuck to their new habits, or routines, on the field.

When I looked back at what The Landmark Forum gifted me I realized it was in their promise of the workshop…what anyone who attends will gain from participating.  The line goes something like this…

Anything you want for yourself and your life is possible out of your participation in The Landmark Forum.

It took awhile for the impact of that statement to land on me.  A few hours into the workshop I was skeptical. But by the second day I had seen so many people open up their lives to what could be possible for them I gained belief for myself and my life.  I said to myself, “Man, if he can do that because of being here…I can do whatever I set my mind to!”

I had gained belief in myself. I had gained a new belief in what was possible.  I believed I was capable of whatever I set about to be, do or have. 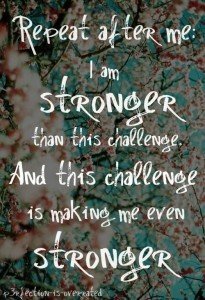 After the workshop concluded I was allowed to join a group that met once a week for 10 weeks.  During our first session I wrote down a handful of things I wanted to have in my life…being a non-bulimic was on the list, but seemed like a big stretch.

I mean, how would that be possible when I was on my own? No therapist. No recovery support groups. No internet chat rooms. No idea how I’d do that when any and every attempt I’d made to put my foot down had failed miserably…year after year after year.

Well, I’m still uncovering the secret to my success with recovery and the more I learn the more I share with my coaching clients to help them, too.  But I can tell you after the Forum I put it out there and just started believing and acting as if it were true. I even told people I would never in a million years have told about my disorder that I was recovered.  They had no idea I was even suffering with bulimia, so they were thrilled for me. I was scared to death to let them down or have the shame of relapsing so I think that also motivated me to stay the course.

Inside I was scared as shit because I’d fallen back on my commitment to never binge or purge again so many times it was a personal inside joke to even try.

I tell you all this because I’m 10 years from that point in my life now.  I’ve never binged or purged since I walked out of that workshop.

Somehow I walked out with enough belief in myself and their promise that anything was possible that I started acting upon that new belief until I mastered it.

I want to confess one thing…I have once in a blue moon sat there and thought about binging and purging, but I never acted on it.  Not once.

This is something I learned in the book, too.  Habits are like a web of links in our brain and I had wired my brain for binging and purging for many years.  It was very hard-wired.

As I began to react to the anxieties, triggers and stresses of my life in new ways, I began to replace that wiring in my brain with new connections. I trained my brain to recall healthy alternatives to responding when things got heated.

I no longer needed to turn to food to soothe me and calm me down. I will also admit I do still enjoy a piece of chocolate or a sweet when get a little stressed or anxious. I want you to know that so you don’t think I’m some perfect person over here. Ha!

I’m just not someone who binges. That’s all.

I eat what feels good and I move on. I am committed to being a non-bulimic and believe in my ability to say “no” to overeating when stress happens.

I want to say a word of thanks to my friend Tami @ GregyZoneMentoring.com – a talent career advisor and coach – for introducing me to The Power of Habit.  I’ve learned yet another piece of the puzzle that helped me create lasting change in my life.

There is so much to be thankful for today that I was to also say thank you to you for being here.  Thank you for reading this.  For listening.  For being open and interested in creating changes in your own life that you took the time to learn something new.

Now that you know this…what can you do differently in your life? How can you increase your belief in your vision, your new life, the change you want to create so that you break past those old habits and patterns and really step up to lasting change?

I have a couple of ideas around creating a strong belief without attending a workshop like The Landmark Forum. I’ll be rolling those ideas around and will share them when they’re formulated.

I look forward to reading your comments – or email me a question if there’s something I can help you with.

With love and light,