A letter to my Eating Disorder…

Eight years ago, you came into my life. You came out of the blue with no warning and planted yourself on my starry-eyed innocence. You became my close and very best friend, a friend to confide in and turn to. You made me bloom like a rare flower in the dessert, and you made me dance around the streets with pure joy. I felt as if I was a feather hovering over the cobblestones, because I had never felt such a lightness in my body before.

Because of you, I could 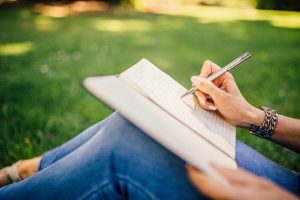 smile at myself in the mirror again. I wanted to make more of myself, do something with my hair, put on make-up and wear fashionable clothes. Because, with your help I could now wear a size small, and even an extra small at times. You made me appreciate myself, and see myself in a different way, and you made others do the same. You were my everything, because you brought forth something in me that no one else had seen.

Because of you, I was suddenly the girl the boys invited to dance. They said I looked good, and I began to believe them, unlike before. Suddenly, I got a completely different relationship with my femininity, my sexuality and my looks. But also, my inner soul. Because now, I was labelled as the pretty, skinny one. I stood out. Now I was suddenly somebody. Someone who was worth noticing. A cool type, someone you would like to get to know. Not like before, where I was always overlooked and never interesting or pretty enough to be noticed.

I had the opportunity to create a career because of you, because now I got messages from photographers who wanted to take pictures of me and use me as their model. You made me discover a talent I didn’t even know I had.

And look at the results? Just look at the likes and comments my pictures got. And we created that. We did this together, you and me. We showed endurance and control that no one else could keep up with. We understood the game, because we figured out the rules. We were better. We were the best, because we had made me the thinnest person among my friends. And you proved to me that I was not a product of my family background, and my obese mother. You convinced me that I did not have the same fate as her. To become overweight and looked down upon by society.

People often asked me what I did to keep such a slim figure. But I couldn’t tell them about you, so I told them I had an extremely high metabolism. I told them I was one of those people who could not eat much at a time, but on the other hand I made sure to eat small meals during the day, which the National Board of Health also recommended. And you know what? They bought it. Even my own mother, who knows me better than anyone bought it. But then one day, she became aware of you as I had lost even more weight. She forced me to weigh myself, and I must admit that I got shock when the weight showed 105 pounds. Had anyone asked me, I would have thought I weighed 119 pounds. The following week, it said 103 pounds, and she sent me to the doctor. You made my mother worried, but not me. However, you made me feel guilty day in and day out. You made me cry at the sight of french fries and bread. Food that I have loved all my life. You praised me when I went to bed hungry and bothered me when I ate something forbidden. I couldn’t go against you. So instead of nourishing your anger I avoided nourishing myself. I didn’t feel full in my stomach, but I felt full of life. And this, was fulfilling enough.

But why get angry with you at all? See what you gave me. See who I had become. So what if my period didn’t show up, and so what if people seemed judgmental when they saw what you did to my eating habits. Why did I have to bother? “Nothing tastes as good as skinny feels” right? And by the way, my own grandmother was of the believe that “you can never be too thin or too rich.” If only she could have seen me from her cloud in heaven. She would understand. She who had commented on my stomach when I was nine and said I should be considered of what I ate, and maybe lose weight. And now I had managed! All because of you, my inner control freak.

After six months my period came back and I weighed 112 pounds. Which was fair. We just wanted to be healthy, without being unnourished, and having no period was clearly going against that belief. In this way, nobody could argue against you either. After all, I was clearly healthy again, and able to control my eating habits and my exercise. And the few pounds you couldn’t see with clothes on anyway. So, this had to be my “ideal weight”. We carried on eating healthy, small portions with a few carbs and lots of protein, exercising as much as possible.

One day, however, it occurred to me that I hadn’t heard from you in a while. It was six months after my period had returned. I was on Zanzibar hoping to connect with my father, which I did, and I know this was a huge life-changing event, and yes it took my attention away from you, but you didn’t have to disappear or let go of me?  Now, I had gained even more weight. Perhaps only 4 pounds, but it was more than I could bare. What if I would continue to gain weight? I begged you to come back, and you did after I returned to Denmark. But this time on your own terms. You stayed by my side for a few months at a time, and then you disappeared without warning, making me eat more than I should. In fact, I began to overeat for no reason. You made me feel ashamed of myself, and worried, because without you I was nothing. I wasn’t important or worth anything, and I certainly wasn’t someone who could live after the norms in society. Without you, I wouldn’t belong. How could I be loved or adored if I wasn’t skinny? Who was I, if I wasn’t the skinny one? I couldn’t lose you, because losing you meant losing my identity. And so, this pattern went on for 8 years to come. Me fighting to keep you, fighting against my body, to be the perfect size.

Because of you, I’ve been on a perpetual diet since I turned 18. I considered this as an on and off relationship, where I was always the one begging for you to come back. It’s only now that I realize you were always there. You never left. You just changed and made me change mechanisms and patterns. It was no longer enough to control my mind, so you took space in my body, asking for more food. It was no longer enough to satisfy my mind, so you made my whole body give in to you. Suddenly, the emptiness the starvation once cured, wanted to be satisfied in other ways. And I didn’t know how, so subconsciously I thought of more food, and began to eat more. Somehow, I just couldn’t control my eating. Only in specific periods, and these were the times I was the happiest. At least that’s what I told myself.

And here we are, 8 years later. And now you’re the one who won’t let me go. You still want to convince me that without you I am nothing. But I have realized that there are other things in life that are more important than you. I’ve realized that I, Rebecca, am a good and talented person without you. I have a voice that is important, and it has nothing to do with you. I came to this realization as I asked myself why I’m unable to move forward in life. For so long I believed I had to lose weight first in order to achieve anything, but I’ve achieved way more in the past years without being skinny, but being slim. I just haven’t been able to enjoy any of it, because I still feel like I’m not good enough. But people have given me so much praise for a lot of things I have done personally, without my tiny figure. You once gave me so much joy and promised me that the worst wouldn’t happen – that I would never gain weight again, but I did. I live my own worst fears every day and that is due to you. Look what you’ve turned me into. A lonely, manic person who doesn’t know who she is without her eating disorder. A person who’s afraid of failing constantly, who cannot tolerate losing. And all of this I only realize now. But I want to be flawed and still prove to myself that I can overcome my worst fears and make my dreams come true. I am worthy of love and appreciation no matter what I look like or weigh.

This week there are two things that has occurred to me. One is that I may be able to turn you into something positive that is good for me – and that is the knowledge you have given me. The second is that I find other things more important than you, for the first time in many years.

I suddenly dream of things without thinking I must be skinny to achieve them, and these things seem far more important than you. You took up space in my brain, my heart, my body and my soul 8 years ago. And that was 8 years too many.

But I’m willing to forgive you for it… No, I’m willing to forgive myself for it. Because if there is one thing I discovered during this time, is that we humans are a product of the experiences we make in life, and it’s not necessarily our success or our happiest moments that show who we are, but our actions to become successful and happy.

However, it’s time we end this. It’s time we go each our ways. I know deep down that I don’t need you anymore. It will be hard to wake up not having you in mind, and I don’t know how I’ll stop thinking about you, but I know I’ll figure it out, because for the first time I actually believe I can make it without you by my side. I want to be free, with courage to create and discover myself. Because now I know what freedom is, it is the ability to love yourself for you.